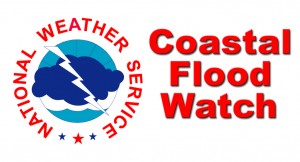 A coastal storm will form off the coast Friday night which will bring rain, heavy at times; strong gusty winds approaching 50mph; and moderate coastal flooding at time of high tide Saturday.  High tide occurs Saturday at the Townsend’s Inlet Bridge Saturday at 10:16am.  Street flooding is very likely at time of high tide in flood prone areas.  Never attempt to drive on any street or through any intersection that is flooded as this puts you and your vehicle at risk, and creates an unnecessary wake that can damage private and public property.

Between two to three inches of rain is possible from this storm event.  Some street flooding from heavy rain is possible in advance of the tidal flooding on Saturday morning.  Property owners should secure any objects that may become airborne, including trash cans and light patio furniture.  Contractors should secure their work sites on Friday for the anticipated strong winds Friday night into Saturday.

If you have any emergency, dial 911.  If you have a power outage, contact Atlantic City Electric directly at 1-800-833-7476.  Continue to follow traditional media outlets for updates on this weather forecast.

Here is the text of the Flash Flood Watch, the Coastal Flood Watch and the Wind Advisory courtesy of the National Weather Service:

…FLASH FLOOD WATCH IN EFFECT FROM 2 AM EDT SATURDAY THROUGH

The National Weather Service in Mount Holly has issued a

* Flash Flood Watch for portions of the New Jersey shore and

* From 2 AM EDT Saturday through Saturday afternoon

* Two to three inches of rain with locally higher amounts are

the coastal storm which will be affecting the region.

exacerbate flooding issues. If the axis of heaviest rainfall

Counties in particular could see quick rises on small streams

flooding which can be life-threatening. Heavy rain is expected to

may quickly inundate roadways and areas of poor drainage. Streams

and creeks could leave their banks, flooding nearby properties.

Please monitor the forecast, especially if you live in a location

that is prone to flooding. Be prepared to take action if a flash

flood warning is issued for your area.

Including the cities of Hammonton, Cape May Court House,

…WIND ADVISORY REMAINS IN EFFECT FROM MIDNIGHT TONIGHT TO 11 AM

limbs could be blown down and a few power outages may result.

A Wind Advisory means that very windy conditions are expected.

Winds this strong can make driving difficult…especially for

objects such as patio furniture and garbage cans should be

inundation above ground level is possible in low-lying areas

near shorelines and tidal waterways. At this level, widespread

flooding of roadways is expected with many roads becoming

impassable. Lives may be at risk when people put themselves in

harm`s way. Some damage to vulnerable structures may begin to

A Coastal Flood Watch means that conditions favorable for

flooding are expected to develop.

Be prepared to begin taking appropriate action to protect life

management officials. Be sure to check the latest forecast from